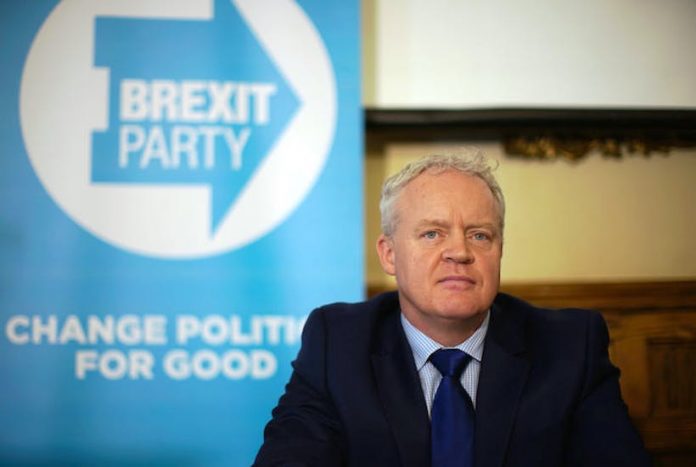 I arrived at the Peterborough Brexit Party headquarters, Monday before the election. Till that point I had nothing to do with the Party apart from signing up as a registered supporter.  From the moment I walked through the door, the process was seamless.  I was cheerfully greeted and made to feel welcome.  Large maps were on the wall.  Within five minutes I was teamed up with three other people who had also turned up alone – from Devon, Hartlepool, Lancashire. One of us had a car and we were sent off with a small map of our assigned area, plus canvassing cards.

The conversation in the car was lively and entirely focused on democracy. These were people who wanted to live in a self-governing nation.  That was pretty much it. It may be wrong-headed, romantic, or to their economic disadvantage. But it was felt strongly enough for all of us to get up on a Monday morning and head to Peterborough. In the area where we canvassed, the support for the Brexit Party was phenomenal.  From that morning I got the impression we would win easily.  But of course it is always a mistake to predict an outcome from a single ward.

The next morning I went back and this time I was sent out with another three strangers to go leafleting. At this stage of the election you could see leaflets from other parties sticking out of letterboxes and blowing in the wind. I wonder if we should have spent the day door-knocking.  With 100 or so of us there that day, we could have found 700 more supporters and persuaded them to vote.

Wednesday, my allotment needed watering so I had the day off – probably Jeremy did too, so I didn’t feel guilty. Thursday I was back.  In the morning three of us were sent out to knock on the door of identified supporters.  It was a long drive and then long walks between houses.  As a party less than two months old, we had a very small pledge base.  So this was a mistake – after all the travel and parking and fiddling around, once there, we should have knocked on every door. We drove back into town, had a long break, and then in the evening everyone was sent back out. This time the instructions were to knock on every door.  Rightly so – a mistake quickly recognised and corrected. (We should also probably have been instructed to stay out in the same area all day – avoiding that long break in the middle; for next time.)

Once again, based on the conversations in that area, I and my colleagues thought that the Party was in for an easy win.

So what do we need to do next time around?

Policies and Manifesto – time for these now

The Party is currently focusing on a single issue – and has not had time to pull together a comprehensive policy direction and manifesto.That is obvious and understandable. In Peterborough this was understood on the doorstep and presented no difficulty at all.  But time for that now.

Bluster is always to be avoided

In the absence of a manifesto, the Party unfortunately strayed into a bit of bluster.  I don’t have the direct quotes (please send ’em in) but I picked up stuff about “we’re doing things differently” or “we don’t need that – we’re action focused”.  But it is silly bluster. One thing that was reinforced to me over twelve years in the Conservative Party, knocking on thousands of doors, is that people are intelligent. They smell bluster.  Yet over and over again we watch politicians bluster and talk nonsense. For example I have heard Conservative politicians tell a room full of educationalists that education spending is continuing to rise – when everyone in the room knows that it is spending per pupil that matters, and that has declined.  The politician knows this and everyone in the room knows this – yet the bluster goes on.   Same sort of thing on countless news clips.  Politicians being asked a straight question – and not answering it.  The whole nation groans. This tendency to bluster, as much as anything else, is what has turned people off politics over the last decade or so.  The few politicians who emerge as genuinely popular are those few who never bluster, and who treat everyone as intelligent and equal and deserving of being talked to straight.  I can think of Mo Mowlen and Clare Short – and I used to put Boris Johnson in this camp too. Mark Francois is joining the club.

There is a clip with thousands of retweets showing Mike Greene talking about the EU’s involvement in education policy.  He seems to be making it up on the fly. This clip needs to be shown to all Brexit Party members of an example of what not to do. When you don’t know about something, say so. This expectation we have for all politicans to know everything about everything, from the micro-details of global warming, through all the treaties of the EU is unrealistic.  Most can’t even name the EU Commissioners…

The Gotcha culture that has emerged of micro-probing from journalistics and then blustering from politicians too afraid to say they don’t know, has just deadened the quality of our political debate.  I want the Brexit Party to lead the charge in breaking out of this cycle. That is half the reason I joined – to try and help create a new political culture with greater integrity, that is intelligent and respects the intelligence of the electorate.

When elections should be about people and policies its seems sad that they are so much about pledges and postal votes.  But on the other hand.  Pledges mean that you have actually stood on doorsteps talking to people.  Bring that on.  The Brexit Party is new – and if I was part of the Peterborough team I would take one week off and then be back out on those doorsteps – after all we want to win next time.

As for postal votes, the Labour Party have recently been very good at this.  They persuade their supporters to postal vote.  Postal vote turn-out is always and everywhere significantly higher than walk-in turn-out. I have to say that I feel a bit uncomfortable about this.  If the support of some parties is likely to be more agreeable to signing up to postal voting that gives them a baked-in advantage. As a Conservative I always found it incredibly difficult to sign up our freedom-loving supporters to postal vote.  In fact when I was a Council candidate I was sort of ordered to postal vote – to free me up for action on election day.  I signed up – but always walked the postal vote in on the day. I like walking in to the polling station. If I was unwilling to really postal vote I wasn’t good at trying to persuade supporters.

Anyway that is a wider debate.  As long as we have the postal vote system, the bottom line is that the Brexit Party, and all the other parties, need to be as good as Labour at signing up their supporters to postal vote. Pretty tedious when you would rather be talking about education policy or pot-holes. But you have to be good at the system you work within.  Peterborough Brexit Party – if you’re going back out on the doorstep soon, give me a call.  I’ll join you.